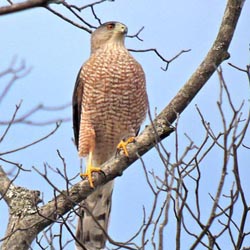 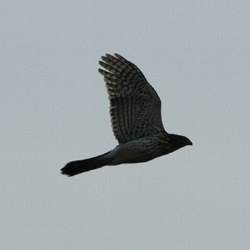 Cooper's Hawk - Male and female Cooper's Hawks have similar plumage, ranging from 14-20 inches but the female is about one third larger than the male. Adults are gray above with a darker contrasting cap on the head, the underparts are barred reddish-brown, the tail is long, rounded, and barred, and the wings are rounded. During the first year, Cooper's Hawks are brown above, with brown streaking on the white underparts. Adult eyes are red; first year bird's eyes are yellow. 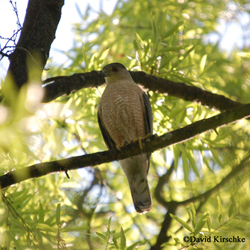 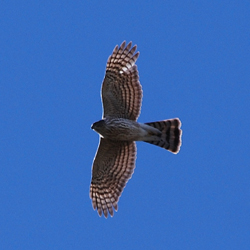 Adult Immature
Sharp-shinned Hawk - Male and female Sharp-shinned Hawks vary in size more than any other North American hawk. They range in size from 10-14 inches with females being the larger bird. Adults are gray above with barred, reddish-brown under parts. Their barred tail is long, narrow, square-tipped, and has a narrow pale band on the end. Adult eyes are red; first year bird's eyes are yellow.