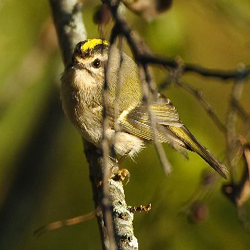 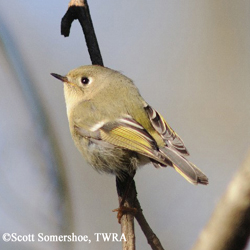 Ruby-crowned Kinglet- Both the male and female have grayish-olive upperparts; dull olive underparts, two strong white wing-bars, and a broken, white eye-ring. The male has a scarlet crown patch, which is usually concealed unless agitated.

· Darker wings and tail with white and yellow edges

· White only at the wingtips.

· Tail is stubbier - so much so that tips of toes may extend beyond the end of the tail.

· Hold wings level when soaring and do not teeter from side to side.