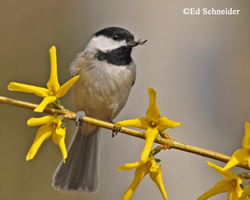 The Carolina Chickadee is found throughout Tennessee except in the very highest elevations of the Appalachian Mountains, specifically the Great Smoky Mountains National Park, where the Black-capped Chickadee, which very similar in appearance, is found. A regular visitor to the bird feeder, the Carolina Chickadee is a conspicuous species that is a favorite among bird watchers because of its energetic nature and identifying call, “chicka-dee-dee-dee”.

Description/Identification see PHOTOS
This small species with a large head and short neck has a short bill, distinct black cap, throat and bib with white cheeks. The back, wings and tail are gray. It is pale below, often with buffy flanks.

Habitat
It is found in deciduous and mixed deciduous-coniferous forests, swamps, open woods and parks in urban and suburban areas.

Diet
It gleans insects and spiders from tree and foliage and bark, often hanging upside down to do so. It also eats seeds and fruits, wedging them with its feet against a perch, and pecking into them. Both species of Chickadees often hide food in different locations and return to eat it later.

Breeding and Nesting
Carolina Chickadees are often monogamous for more than one nesting season. Both male and female excavate or choose an existing tree cavity, usually at least 5 feet from the ground. The female builds a nest of moss, lined with a thick layer of mammal hair or strips of plant fibers. In Tennessee, nesting begins in mid-March and peaks in early April.
Clutch size: 3-10 (usually 5) white eggs with reddish-brown mottling
Incubation period: Only the female incubates the eggs for 12-15 days. The male feeds his mate during incubation and sleeps in a nearby sheltered perch. Nestlings are fed by both adults and fledge is 17-18 days. Fledglings remain with parents for another 2 weeks.

Song/call
A clear fee-bee, fee- bay or a quick “chicka-dee-dee-dee” while foraging 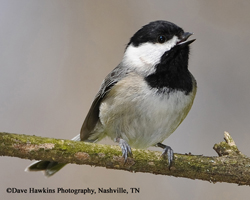 • Use natural, uncoated wood such as cedar or redwood which are more durable than pine or exterior plywood. Use at least ¾ inch boards.
• Make corner opening on the floor bottom of the box to allow drainage and facilitate ventilation
• Never include an under-the-hole perch.
• The roof should provide sufficient overhang beyond the box entrance or vent holes to protect the birds from the elements.
• The roof should have a minimum of ½ inch overhang at the back.
• The nest box must have watertight construction at all seams.
• Cross ventilation is strongly recommended.
• Include one hinged, side panel that opens for easy monitoring and cleaning.

Box Placement
To attract Carolina Chickadee, place your box in a more wooded area than recommended for Eastern Bluebirds. Place the box near woods, shrubs, and thickets, which are used for foraging and hiding from predators. Farms or barnyards where animals are fed are not recommended sites for boxes because these are attractive to House Sparrows. Avoid placing your box where pesticides or herbicides are used.

The nest box should be mounted on a ½" to ¾" electrical conduit post placed over a 3 to 4 ft. piece of rebar. Both materials are available at hardware stores. Pound the rebar into the ground and slide the post over it, making sure that it is solid and steady. Mounting the box on a tree or fence post is not recommended.

Mount the box so that the entrance hole is about 5 ft. from the ground and facing, if possible, to the east, away from direct summer afternoon sun and from north winds that may drive rain into the box. A tree or shrub that is within 100 feet of the box will provide a perch for the adults and a safe spot to land for the fledglings' first flight. If you plan to put up multiple boxes in an area, we recommend placing boxes at least 100 yards apart to reduce competition between Carolina Chickadees and other species.

Squirrels or woodpeckers sometimes damage the entrance hole, making it larger and allowing undesirable species to enter the box. This can be resolved by placing a copper or other metal hole- guard (available at hardware or wild bird retailers) over the damaged hole. A block of 1.5" hardwood with an entrance hole made and placed over the original hole will also work.

Monitoring Your Box
To prevent doing more harm than good, do not install a box if you do not plan to monitor it. Check the box once a week during the nesting season to monitor status of bluebirds or other native nesting species, check for leaks and damage on the box, and provide you with a wonderful education. Keep in mind that even the perfectly built and placed box may not attract a breeding pair the first year. If after two years of not having native birds nesting in your box, you may want to move it to another site.

Monitoring tips:
-Research to recognize the eggs and nests of other species, especially House Sparrows
-Check the box only on a warm, dry day.
-On your day to check the box, try to observe activity of the adults and approach the box while they are away.
If they are present, don't worry that they will desert the nest. They may fly to a perch to watch you, and you may receive a few scoldings from them, but they will return when you leave the area.
-Approach the box quietly.
-Check for ants or other parasites.
-Remove and destroy House Sparrow eggs and nests.
-To prevent premature fledging, do not open the box after 12 days from the time the nestlings hatch.
-Remove and dispose of the nest in the trash soon after the nestlings have fledged. They will not return to the nest and the adults will build another, cleaner nest for the next brood.
-Keep records of the activity in your box.