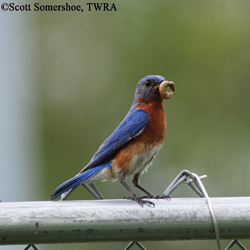 The brilliant blue color of the male, the delightful call and familial behavior make the Eastern Bluebird one of the most popular songbirds in Tennessee. It is a permanent resident, though some birds may move short distances south from their breeding areas to avoid very cold temperatures.

Status in Tennessee
Populations fell in the early 20th century due to many factors. Competition for nesting sites from introduced species, loss of open space and natural nesting cavities, increased pesticide use and climatic events contributed to the decline. In the 1970's, conservation efforts to provide nest boxes specifically designed to keep out the larger European Starling combined with a campaign to provide and monitor boxes for use by invasive House Sparrows has helped with the recovery of the beloved species.


Habitat
The Eastern Bluebird is found in fields or open forests. It is often observed perched on wires, posts, and low branches scanning the ground for prey. It traditionally nested in naturally occurring tree cavities or cavities created by woodpeckers in trees or fence posts.

Diet
Arthropods caught on the ground including: caterpillars, beetles, crickets, grasshoppers, and spiders are the main diet. In fall and winter, bluebirds eat large amounts of fruit from native species such as poison ivy, sumac, black cherry, dogwood, hackberry, blueberries, and mistletoe.

Breeding and Nesting
The Eastern Bluebird can have up to 3 broods a year and often use the same nest for all broods. Males attract females to the nest with a display in which he carries nesting material into and out of the cavity. The breeding pair can stay together for several seasons. In Tennessee, first clutches are commonly laid in March and last clutches as late as September.
Nest: Fine grass or pine straw made into a neat cup by the female
Clutch size: Usually 4 to 5 pale blue (or rarely, white) eggs. Female begins laying eggs a few days after the nest is completed and usually lays one per day. Incubation does not start until after all eggs are laid so that all eggs hatch on the same day. 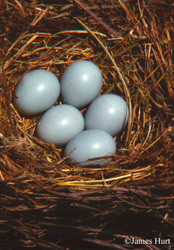 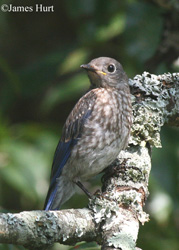 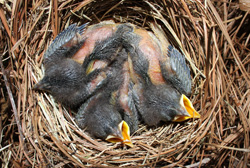 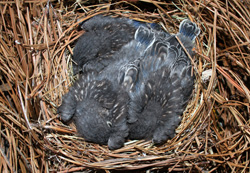 Eastern Bluebird nestlings (4-5 days, left; 10-11 days, right)
Incubation period: 12 to 15 days.
Fledgling period: The young are fed by both parents and depend on them for 2-4 weeks after fledging. Young from second or third broods often stay with parents over the winter.

Songs and Calls
Song is a soft, warbled "cheerful charmer". Call is a soft "tru-ly" when communication with mate or young. Also gives a raspy alarm call.

Fascinating Facts
• This species has been observed using nest boxes to stay warm during cold winter nights, packing 8-12 individuals into one box.
• The clutch size of Eastern Bluebirds varies with latitude and longitude. Bluebirds that nest farther north and farther west have larger clutches than southern nesters.
• The oldest known Eastern Bluebird in the wild was 10 years 6 months old.

Standard rectangular box design (NABS) is the commonly built and mostly easily recognizable nest box built for Eastern Bluebirds. The NABS box is made with only one board and is easier to build and appropriate for the young or amateur wood builder.
NABS Box Design PDF

Peterson style box
Peterson box is more challenging to build, but is preferred by bluebirds in some areas. The OVAL entrance hole is critical for access by bluebirds. If you use a round entrance hole, few, if any, bluebirds will ever use your box.
Peterson Box PDF


Both designs follow the criteria recommended by the North American Bluebird Society (NABS), including the following specifications:
• Use natural, uncoated wood such as cedar or redwood which are more durable than pine or exterior plywood. Use at least ¾ inch boards.
• Make corner opening on the floor bottom of the box to allow drainage and facilitate ventilation
• Never include an under-the-hole perch.
• The roof should provide sufficient overhang beyond the box entrance or vent holes to protect the birds from the elements.
• The roof should have a minimum of ½ inch overhang at the back.
• The nest box should have watertight construction at all seams.
• Cross ventilation is strongly recommended.
• Include one hinged, side panel that opens for easy monitoring and cleaning.

Box Placement
Place your box in an open or mowed area such as a lawn or field where the ground is not covered with underbrush or tall grass. Scattered trees, power lines and fence posts nearby provide important perch points for the adults. Farms or barnyards where animals are fed are not recommended sites for bluebird boxes because these are attractive to House Sparrows. Avoid placing your box where pesticides or herbicides are used.

The nest box should be mounted on a ½ inch to ¾ inch electrical conduit post placed over a 3 to 4 ft. piece of rebar. Both materials are available at hardware stores. Pound the rebar into the ground and slide the post over it, making sure that it is solid and steady. Mounting the box on a tree or fence post is not recommended.

Mount the box so that the entrance hole is about 5 ft. from the ground and facing, if possible, to the east, away from direct summer afternoon sun and from north winds that may drive rain into the box. A tree or shrub that is within 100 feet of the box will provide a perch for the adults and a safe spot to land for the fledglings' first flight. If you plan to put up multiple boxes for the Eastern Bluebird, we recommend placing boxes at least 100 yards apart. In areas where Tree Swallows are abundant, placing two boxes within 25 feet of each other may allow both species to nest together peacefully. Carolina Chickadees, House Wrens, Tufted Titmice, and White-breasted Nuthatches are native species that will readily use boxes erected for Eastern Bluebirds.

Squirrels or woodpeckers sometimes damage the entrance hole, making it larger and allowing undesirable species to enter the box. This can be resolved by placing a copper or other metal hole- guard (available at hardware or wild bird retailers) over the damaged hole. A block of 1.5" hardwood with an entrance hole made and placed over the original hole will also work.

Monitoring Your Box
To prevent doing more harm than good, do not install a box if you do not plan to monitor it at least one or two times during the nesting season. ideally, check the box once a week during the nesting season to monitor status of bluebirds or other native nesting species, check for leaks and damage on the box, and obtain a wonderful education. Keep in mind that even the perfectly built and placed box may not attract a breeding pair the first year. If after two years of not having native birds nesting in your box, you may want to move it to another site.

Monitoring tips:
-Research to recognize the eggs and nests of other species, especially House Sparrows
-Check the box only on a warm, dry day.
-On your day to check the box, try to observe activity of the adults and approach the box while they are away.
If they are present, don't worry that they will desert the nest. They may fly to a perch to watch you, and you may receive a few scoldings from them, but they will return when you leave the area.
-Approach the box quietly.
-Check for ants or other parasites.
-Remove and destroy House Sparrow eggs and nests.
-To prevent premature fledging, do not open the box after 12 days from the time the nestlings hatch.
-Remove and dispose of the nest soon after the nestlings have fledged. Adults and young will not return to the old nest and the adults will build a new nest for the next brood.
-Keep records of the activity in your box.